The GFWC Crescent City Woman’s Club (Florida) completed 46 blankets during a meeting in January to be sent to Operation Smile, the State Project of Florida State President Sharon Carter Oliphant.

Members of the Homemakers of Hickman Mills (Missouri) wrapped up 2018 by collecting 40 hats, 16 pairs of gloves and mittens, 5 scarves, and miscellaneous slippers to be donated to the Community Assistance Council and GAP. 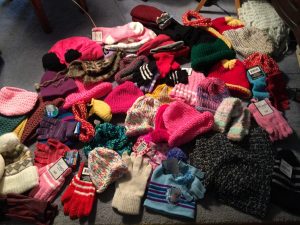 Members of the Women’s Club West Side (Pennsylvania) purchased and donated 454 pairs of women’s and children’s socks to the domestic violence center in Wilkes-Barre and the Catherine McAuley House in Plymouth.  This “Step Away from Abuse” project was part of the GFWC State Presidents Project. Pictured are Gail Frank, GFWC West Side President, Becky McCuen, and Co-Chairman Eileen Gallagher.

The GFWC Women’s Club of San Bernardino (California) collected socks for the Toasty Toes project. They collected over 500 pairs that will be delivered to a domestic violence shelter and a homeless shelter in San Bernardino. 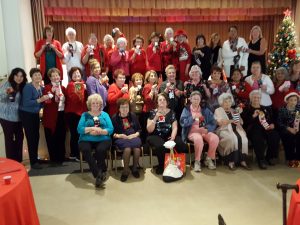 When Georgia State President Tina Daniel heard about the challenge to plant trees as one of the Seven Grand Initiatives, she thought, “This will be an easy one.” But in her own words, “Wow! Was this president wrong!” Locating affordable trees, getting them shipped by Georgia’s Arbor Day on February 15, and locating a place to plant 100 seedlings proved to be more difficult than she thought, but definitely worth it! The Tallulah Falls State Park (TFS) was gracious enough to allow the GFWC Georgia Federation to plant the seedlings, giving them a list of various native trees they need to help with erosion issues. Tina was finally able to locate Warren County Nursery in Minnville, TN to help with a cost friendly native seedling to ship by the needed February 15 date. On February 15, they had their third day of preparing the TFS State President’s Garden for their rededication on June 1, 2019. They planted a tree in their garden in memory and honor of their life directors. After working in the garden, they gathered at Tallulah Falls State park and planted 100 seedlings in the gorge.