Congratulations to Rosie Hidalgo, Office on Violence Against Women 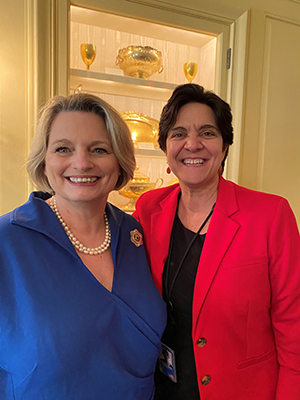 GFWC congratulates Rosie Hidalgo on her Presidential nomination to lead the Office on Violence Against Women at the Department of Justice. Ms. Hidalgo currently serves on the White House Gender Policy Council as the Senior Advisor on Gender-Based Violence and as Special Assistant to the President.

Ms. Hidalgo first visited GFWC Headquarters during the 2016-2018 Administration as a guest of International Past President Sheila Shea to participate in a briefing for the Executive Committee when she served as Senior Director of Public Policy at Casa de Esperanza. Joining the Biden White House in March 2021, Rosie has met with GFWC President Marian St.Clair; arranged for Jennifer Klein, Executive Director of the Gender Policy Council, to speak to the incoming GFWC Board of Directors at Orientation in January; and included GFWC in the March 2022 celebration at the White House of the reauthorization by Congress of the Violence Against Women Act.

Rosie Hidalgo has worked to end gender-based violence for more than 25 years as a national policy advocate and a public servant. She is beloved by the advocacy community and known for her leadership and vision.

GFWC salutes our friend Rosie Hidalgo for her nomination to lead the Office on Violence Against Women at the Department of Justice and wishes her the best during her Senate confirmation.