On October 10, 2019, GFWC New Hampshire was inducted into the NH Coalition Against Domestic and Sexual Violence’s HALL OF FAME. The Coalition recognizes an individual and an organization annually for their tireless efforts on behalf of victims of crime and support of survivors. 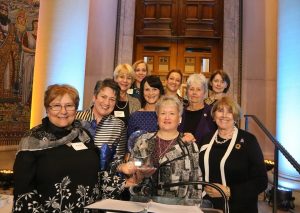 From Lyn Schollett, Executive Director of the Coalition:

The General Federation of Women’s Clubs NH has hundreds of committed members all across our state who have demonstrated an unparalleled commitment to community service. Many of their advocacy efforts center on preventing child abuse, domestic violence, and sexual assault; and connecting their fellow Granite Staters to local resources like crisis centers and mental health services. The Coalition has been fortunate to partner with this incredible organization for many years. Their members have hosted phone banks, attended legislative hearings, organized events, volunteered at a softball tournament/fundraiser, and have truly been the force of grassroots organizing that the anti-violence movement has depended on. We are inspired by their sense of community and stand in awe of their ability to drive change. 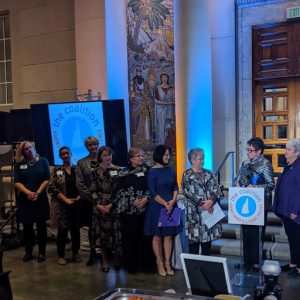 The New Hampshire Coalition Against Domestic and Sexual Violence has worked tirelessly to empower survivors of domestic and sexual violence in New Hampshire. Wishing its members a successful dinner and I thank and congratulate this year’s honorees, Tom Velardi and GFWC New Hampshire, for their continued and vital work on behalf of survivors to ensure that they are heard, helped and have the support needed to seek justice. –J.S.
In addition to the noted activities above, GFWC NH passed a resolution to support crime victim’s rights, wrote letters to the editor, served as keynote speakers, been featured in informational/promotional videos, volunteered at a softball tournament/fundraiser, and testified to their state legislators. They are also working with the Coalition to develop the Go Forth with Confidence NH Scholarship, for a male or female survivor of domestic or sexual violence.

As Tina Smith, GFWC NH Signature Program Chairman, said in her acceptance speech:
To us, this is not just an award, this is gives us motivation to continue our work with the Coalition. GFWC NH is now in their Hall of Fame, but we will always continue to stand beside them to end domestic and sexual violence. 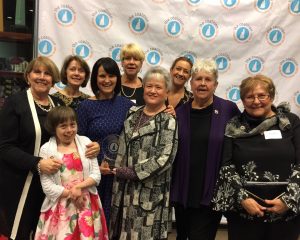 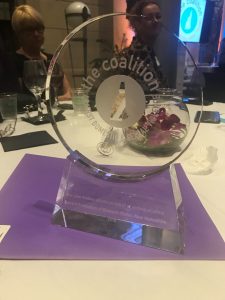