NFWC Education Chairman Donna Lefler presented The ESO Diamond Award to Nancy Galaway of the GFWC Fairmont Woman’s Club at the NFWC District IV Convention on October 9, 2019 at Exeter, Nebraska. The Diamond Award is for reading 1,000 books in the ESO program.

Learn more about the Epsilon Sigma Omicron (ESO) is a reading program.

The theme of the Nampa Idaho Senior Faire was Super Heroes and members of GFWC Nampa Woman’s Century Club looked the part at their informational table! Many women were introduced to the club and were invited to attend our next meeting. The booth also won best booth!

On October 1, the GFWC South Baldwin Woman’s Club held its 2nd Annual Gulf Shores Goes Pink. All municipal buildings, bridges, and palm trees at Gulf Place were lit pink at dusk. This was a free community barbecue at Gulf Shores Fire & Rescue Station 1 in Gulf Shores. All donations were made to the Guardians of the Ribbon: the Pink Heals of Lower Alabama. The Pink Heals were formed to bring awareness to breast cancer—and pink was for the moms. Cancer is not age nor gender specific. All club members have been touched by cancer in some way, whether it be themselves, a family member, a neighbor, or a caregiver. The GFWC South Baldwin Woman’s Club, the Pink Heals, and Gulf Shores Fire & Rescue care! Money raised for the Pink Heals stays in the community to help those who need it the most. 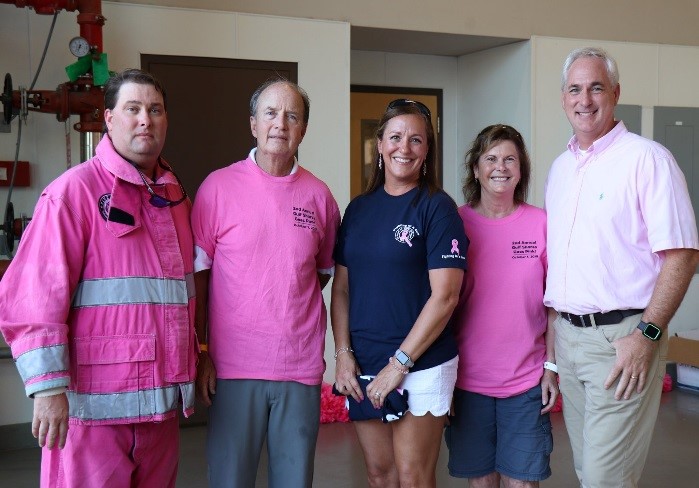