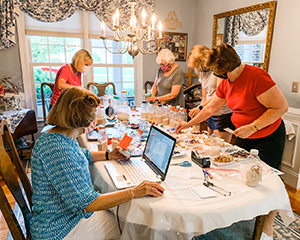 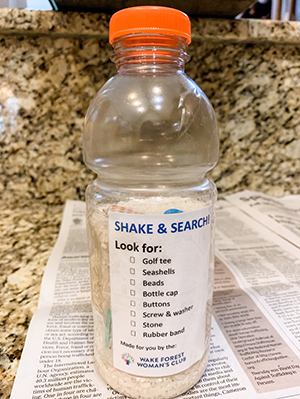 The Wake Forest Woman’s Club (North Carolina) supported local care facilities by making and donating 110 Alzheimer’s Sensory “Shake and Search” Bottles to them.  Led by the club’s Arts and Culture Co-chairs, club members worked together to collect and clean empty Gatorade and Tropicana Bottles and caps, which were then partially filled with dry rice. Various interesting small items were placed inside the bottles. An attractive and original label was created and affixed to each bottle that listed the various items contained inside each bottle, along with a message: “Made for You by the Wake Forest Woman’s Club.”  The caps were securely hot glued onto each bottle, and the bottles were again sanitized and boxed for hand delivery to each facility. 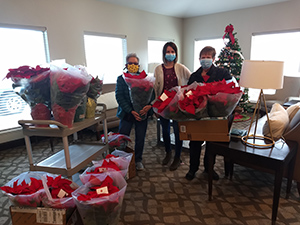 Under those masks are smiles of joy! The GFWC Tremonton Women’s Civic League (Utah) donated poinsettias for each of the residents in the Our House Assisted Living Complex. Two members of the club are shown presenting the poinsettias to the facility manager. The residents were thrilled to receive a beautiful poinsettia for their room. The club is generating funds for community projects through their poinsettia sale.

GFWC of Holden Beach members decided to Break the Silence Against Domestic Violence at the November virtual club meeting. By making as much noise as they could, the club encouraged everyone to do the same thing and post their video on YouTube and Facebook. The members in hats are Past Club and State Presidents who dressed in white for a presentation on the 100th Anniversary of the Passage of the 19th Amendment granting women the right to vote. 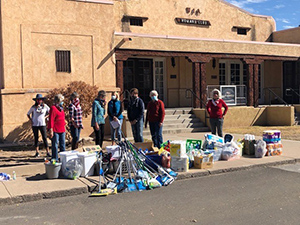 GFWC Progess Club of Las Cruces (New Mexico) donated cleaning supplies to Veterans who have been able to move out of homeless into apartments. The generosity of club members was awesome, and the opportunity to give back during these times was heartwarming! 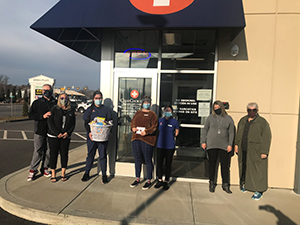 Healthcare workers are having a difficult time right now with the COVID increase and they were so very appreciative of the snack gifts.