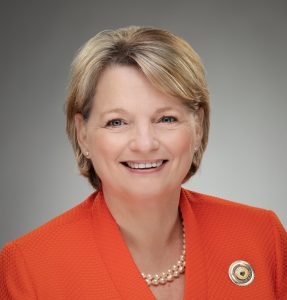 Marian St.Clair has been a passionate and energetic clubwoman since 1989. She has been a member of the GFWC Board of Directors in succeeding administrations since her 2002-2004 term as South Carolina State President, serving as Bylaws Committee Member, Conservation Beautification Chairman, Leadership Committee Member, Treasurer, Secretary, Second Vice President, First Vice President, and President-elect. She has also assisted with LEADS, presenting, “How to Write a Great Speech.”

Sharon Oliphant is filled with positive energy and gratitude for all of the opportunities she has to give back because of GFWC. In 2018 she will begin her time as Florida State President, and Sharon is assume the role and work with her enthusiastic Florida clubwomen to make a difference.